You can listen to the singing whales live and uncensored. I’m listening to them now. They sound alien and rather peaceful in their alien sort of way.

As I mentioned previously, there’s been high surf for about a week, here. Wintertime and all.  Little did I know that the wind and weather can’t be controlled in paradise. Silly me. Today was the first not-so-high-surf day.

We were up early to meet with our group at 7:30. Pauko Bay is only a 15 minute drive from where we’re staying. It’s known for it’s beautiful beach that’s been washed away during this last storm. Remember I said most of the beaches were closed?  They had just cause. Lots of flooding and loss of power in this little community. Fun fact: Neil Young lives here.

Okay, back to whales…I did something I don’t normally do. I soaked up the atmosphere rather than try to take pictures of the beasties. I took a few pics, as you will see in a second. There was a baby whale trying out his breaching skills who was adorable. 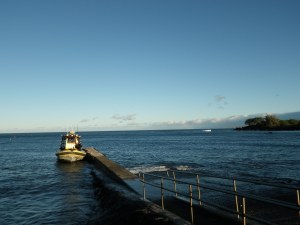 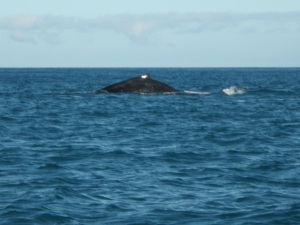 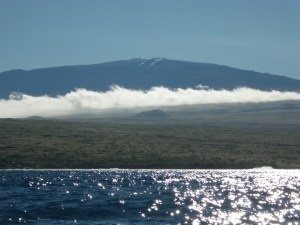 I love being on the water. I want to go again.

Here’s Adventure X’s website should you ever be in this area. http://hawaiiankineadventures.com. I highly recommend them. They’ve got some fun videos on the site of close encounters. The people are great…friendly and knowledgable. You can tell they’re loving their day jobs. You’re greeted with fresh baked muffins and banana bread. Mid-trip you’re served fresh pineapple and mixed nuts. Soft drinks, juices and water are also available.  And, if necessary, they’ve got a bathroom so you can enjoy the soft drinks, juices and water.

Like most whale watching tours, there are no whale wranglers. The big guys go where they want to and they wanted to sing and stay in the distance. We had a couple close sightings…close enough to hear them blow, one of my favorite sounds.And we had a lot of sightings. There are a lot of whales here!!!

Since it was still early when we came back in from the trip, Mr. Al and I  decided to check out some of the beach access spots.  The wind had kicked up and it was rough. Saw a large number of the  small green sea turtles trying to feed. They were being buffeted about like frisbees with flippers, just under the surface. Tried to take pictures, but all I got were swirls and waves.

As you can see, there’s not much beach at the moment. 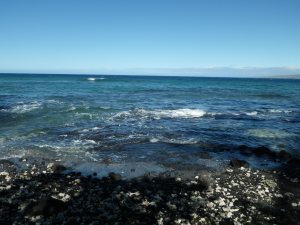 Not sure what tomorrow will be bringing. We may try snorkeling south of Kona. However, we’ve been told that it’s not the best of conditions until the wind dies down. I’ve a friend who lives here part of the time. I wasn’t able to see her as she’s returning to the Mainland tomorrow. However, she told me she’s not been snorkeling for a couple of weeks now. Yes…winter in the tropics. Each season, something different. This season is Whale Season. And surfing. Aloha, Peeps!

One thought on “Whale Watching with Adventure X”