I’m a sham. A charlatan.

But this doesn’t stop me from ordering the bigger, better, brighter and shinier gadget when it’s offered on my phone plan. It’s so amazing to me that I’m walking around with a teeny tiny computer in my hand. And the Maps App is my new best friend. Mr. Al and I’ve been having lots of fun driving around and discovering our new backyard, not getting lost cuz they’ve got an “App for That.”

It’s been rainy here. Apparently it’s that way a lot. Not that it wasn’t rainy back in Humboldt. Not that we’re not used to this kind of weather.  It keeps me focused on my unpacking-and-settling-in which is getting oh-so-boring to my ADD self.

I leave you with some pictures on some of our adventures. Why go directly from Point A to Point B when the winding way is so gosh darned pretty?

This first shot isn’t so pretty.  It’s a mountain of garbage.  Look how small that huge equipment appears!  Yep.  That’s landfill…all the stuff nobody wants. It gets buried with pipes that allow the methane to escape.  Garbage in. Garbage out.  Mr. Al and I are really big on recycling.

Here’s the mountain, making himself known.  He’s so lovely.  He taunts us.  We want to explore him. We want to fish and canoe and join the local fly fishing group.

Here’s our downtown at sunset. Note the one stop light. That’s it. Please, no blinking, or you’ll miss it. 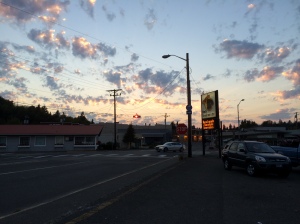 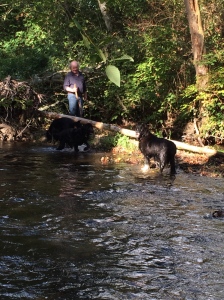 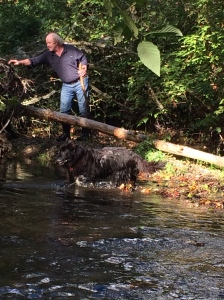 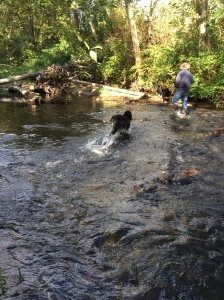 The creek is rising a little bit, now it’s been raining.  We are understanding the importance of levees since the season has just begun.

Okay…sigh…back to the business of nesting.  Spoke with my proofreader.  Sky Dancers is nearly ready for formatting.  Great motivation for unpacking my office/studio space.

Have a great week, peeps!!