I love driving through the small towns and then come upon something quirky like Paul Bunyan. 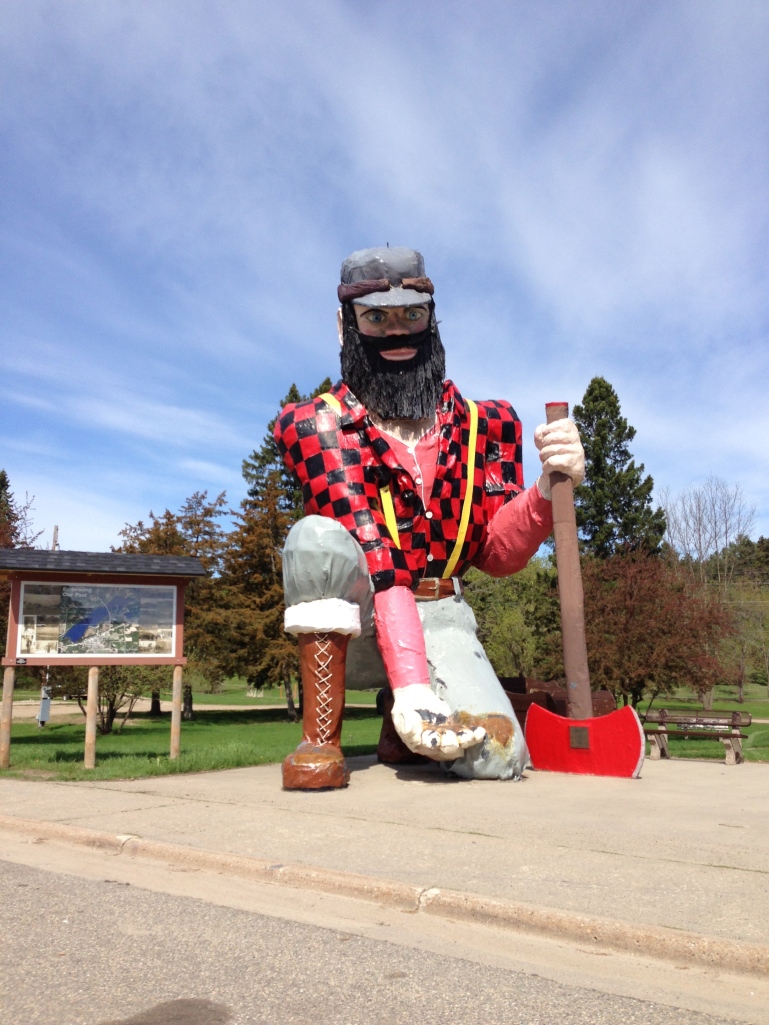 To get to Ely from Park Rapids, is to drive through the heart of Minnesota’s mining district.  Hills of red dirt made by man lined the highway.

Beside the hills are reservoirs,, created from the abandoned mines, themselves.  When I think of mines, I think of old prospectors or coal streaked men crawling around underground.  These mines were huge productions, revolving around digging ginormous holes.…going for the taconite, an iron ore that’s a key ingredient for steel.  Here’s a link that tells you all about it if you’re interested.

All I can say is that it certainly disrupts the landscape.  And all I could think about were Ayn Rand books.  I think Howard Rorack was working in the stone quarries around here in The Fountainhead.  And then there was Hank Rearden of Rearden Steel in Atlas Shrugged. So as we were driving through the mining country, I just was remembering stories.

Drove through HIbbing, where Bob Dylan was born.  And then we reached Ely, the base camp for the Boundary Waters Canoe Area.  The town is chock full of canoes and outfitters.  I’d say ever fifth car had a canoe or two tied to it’s hood.  I felt positively naked in my car!  Mr. Al and I started jonesing big time for a paddle in our hands.  All those lakes!  It got worse when we met with our Outfitters and the first thing John said when we introduced ourselves was “You two should be going out today!”

Ai!Yi!Yi!  Were we that obvious?

Ten miles down this river is Canada and thousands of lakes to explore. We wanted to take a canoe and do just that.

Back home, it’s all Kayaks.  Here, canoes and we felt like we belonged….But before we visited North Country Outfitters, we visited both the International Wolves Organization…

(There are 3 Wolves in this photograph.  Can you see them?  Two are dozing.) 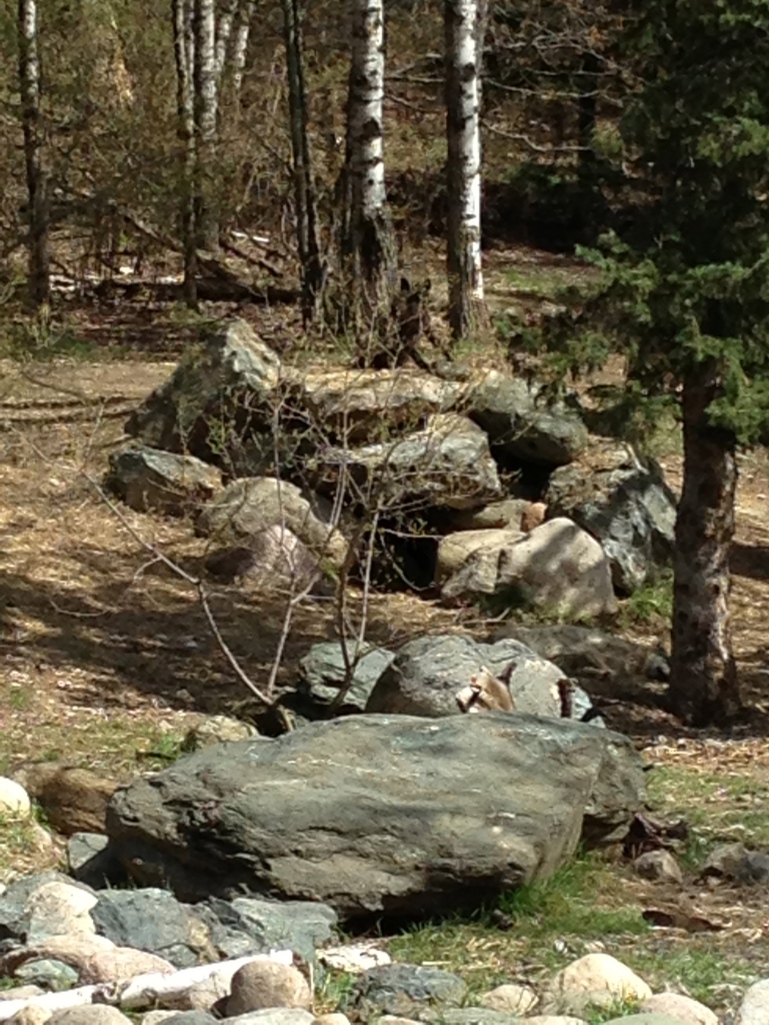 and the North American Bear Center.  The three ambassador bears weren’t in their two acre playground because of some construction, but we were taken back behind the scenes to watch the bears taking their baths. 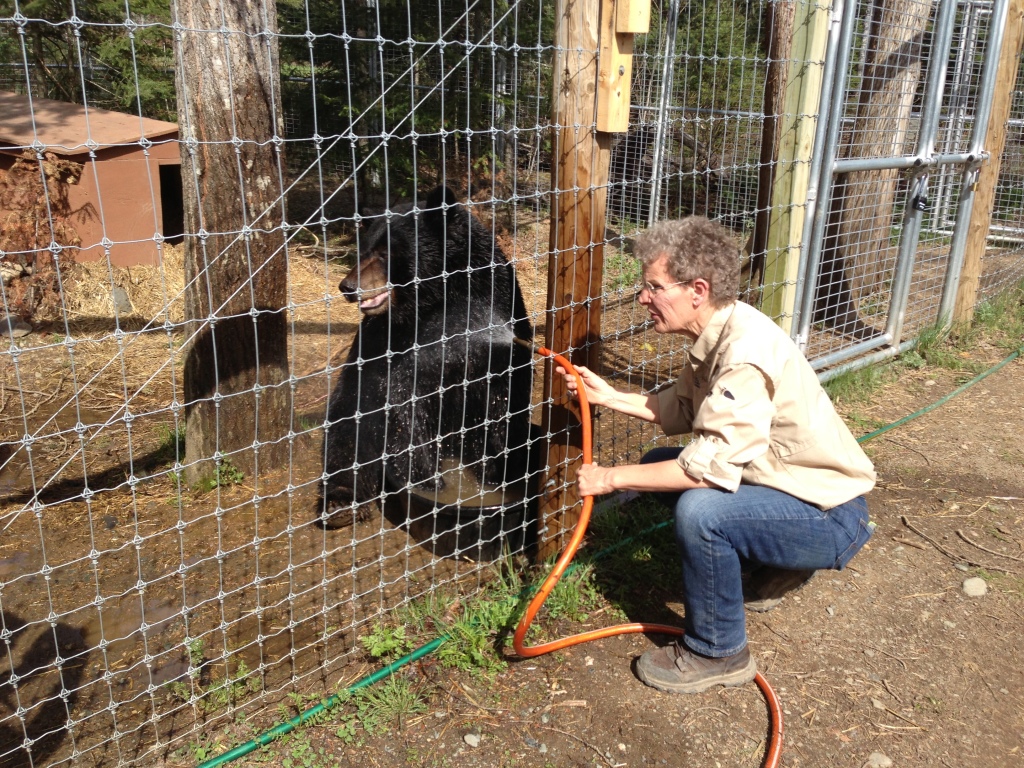 I learned so much about the wolves and the bears. We must have spent a couple of hours at both places.  And I’m planning to visit their websites to keep learning.  Fascinating.  One thing that I learned is if you are non-threatening with a black bear and don’t try to take it’s food or it’s cubs, it pretty much leaves you alone.  When it is scared, it will charge, but if you are brave enough (and I wouldn’t be) to remain calm, the charge  will stop several feet away from you, and the bear will move on. The bear, above, was really sweet.  He would “kiss” the  woman’s hands by licking them because the bath was feeling so good.  However, when it came to feeding time, there was one person who distracted the bear with treats and another who opened the cage and put the food inside.  In other words, nobody took any chances with this gentleman.  All three of the ambassador bears had been raised in captivity and would not do well in the wild.

Same went for the wolves.  They would introduce only two pups every four years into their ambassador pack.  Since the wolves were contained, and the alphas, when challenged, had no place to go, the Institute would “retire” the older wolves so that there would be no challenges and deaths.  There are currently three retired wolves.  One, the oldest, lives alone, and the other two–litter mates and lovely and white, lived together.

And here’s one more look at downtown Ely, a town, I was told that is always active with tourists all year long. In the summer, it’s canoeing and fishing.  In the winter, it’s sled dog racing, snow shoeing and cross country skiing. And, of course, ice fishing.  I loved the energy of the place.  So active and curious and tinged with adventure.

Currently, we are in the Minneapolis area visiting.  Spent a wonderful day exploring a park at Taylor’s Falls with a good friend.  We’ll be heading home on Thursday, and I’ll continue with my Chronicles at that time….